The Master Villain & the Novice Detective What is the hype all about for the series, what's the importance of genre and global value, and what are our expectations for this series. 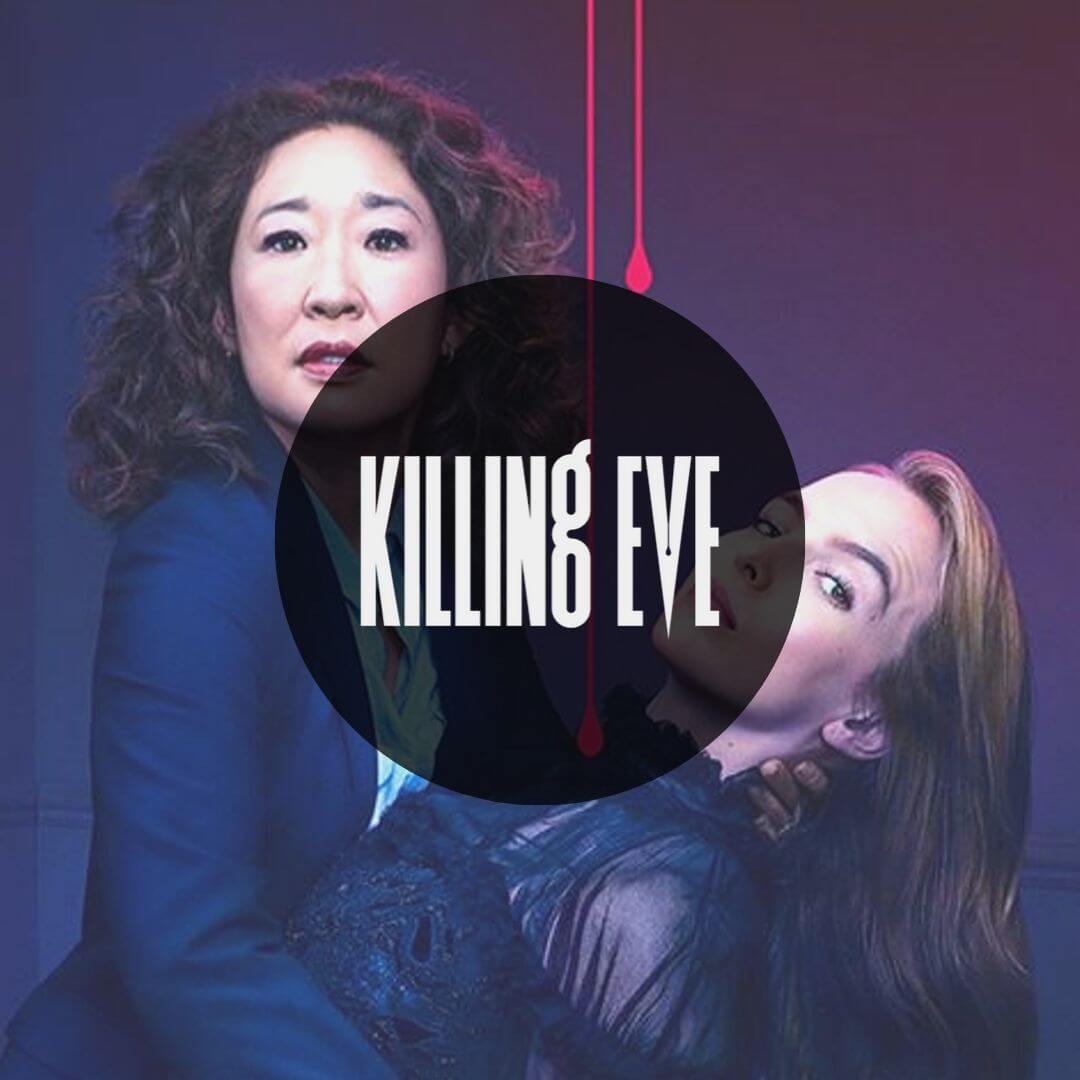 Here’s a question for you. When you see the preview of Killing Eve, or the trailers or blurb, what do you think the series is going to be about?

These are the expectations that the screenwriters set the viewers up to anticipate from the beginning.

Will the series meet those expectations?  well, we're here to find out.

Before we get into the analysis though,  what’s the hype about this series and what’s it all about?

I want to talk about the origin of Killing Eve.

It's based on a novella series titled Codename Villanelle by British author Luke Jennings.

Like was a Guest at the London Writing Salon I was hosting and he stated that he wanted to write a series away from the traditional Bond-eque male character, he wanted to turn the genre on its head.

Luke had this idea in his head, this character Villanelle.

So he self-published Codename Villanelle, showed it to Phoebe Waller-Bridge (of Fleabag fame), and they produced this for BBC America and now it’s become a global hit.

Here is the pitch for the Killing Eve series:

Eve Polastri, played by Sandra Oh, a British intelligence investigator is tasked with capturing psychopathic assassin Villanelle, played by Jodie Comer; as the chase progresses, the two develop a mutual and rather deadly obsession. I can’t think of another series where the crisis is: should I kiss her or stab her? (except for maybe the final episode of Game of Thrones).  And if there ever was such a choice, one would expect a series to end in a kiss. But oh no not in this thriller.

I thought this was a pretty unique scene until someone reminded me of the Game of Thrones ending with Jon Snow and the Dragon Queen.

Awards: This series has been sweeping up all the shiny awards. Killing Eve won:

Sandra Oh, as the protagonist, won the Golden Globe Award, Screen Actors Guild Award, and Critics' Choice Award for her performance in the series.  The other two main actresses, Jodie Comer, and Fiona Shaw have been nominated for awards as well.

Luke Jennings created an awesome assassin antagonist in his book Codename: Villanelle.  But the book is a little different than the series.  The book definitely has Villanelle as the main character and he presents her to the readers as a psychopathic assassin, but the way that the reader knows she is a psychopath is by getting into her head.

So, I wanted to read an excerpt from the novella Villanelle that describes exactly the character he was trying to create:

"The truth is that the world has a problem with people like you.  Men or women who are born without a conscience, or the ability to feel guilt.  You represent a tiny fraction of the population at large, but without you…” He lit another cigarette and sat back in his chair.  “Without predators, people who can think the unthinkable, and act without fear or hesitation, the world stands still. You are an evolutionary necessity.”

I have a quote from an interview with Luke Villanelle I'd like to share about his concept of Villanelle:

"I've always been a thriller fan.  At school, I read and reread the James Bond novels and remain an Ian Flemming devotee.  But the genre has got stale.  Today's male thriller heroes are, almost without exception, humourless bores.  All those Special Forces fuck-ups, all that embittered whiskey drinking and late-night jazz, all that technology fetishism. Why not turn the genre on its head, I wondered.  Why not have some fun.  And so was born Villanelle.  She came to me all of a piece.  I woke up and saw her standing there, fixing me with her icy sociopathic stare."

That's messed up Parul, I was one of those Special Forces F-Ups.

Yes, Villanelle is definitely a psychopath.

As we review the episodes, we’ll see if the television series was able to create the Villanelle from the novel.  I expect to see a lot of scenes where Villanelle acts anything but ordinary in order for the viewers to really see how warped she is.

The Importance of Genre:

The Story Grid method is based around the Genre of the story because it will help us track the Controlling Idea, the Protagonist and Antagonist’s Object of Desire, and the Conventions and Obligatory scenes.

Killing Eve falls into the Thriller Genre with a subgenre of Serial Killer.

The purpose of a Thriller is to allow the reader to experience the excitement without personal risk.

I think this is captured very well as the protagonist attempts to track down a deadly assassin throughout Europe. Also, Thrillers have elements of the Action, Crime, and Horror genre. There is definitely a feel of the Crime Genre in the way the protagonist has to follow the clues to find Villanelle, and also of the Horror Genre in the way Villanelle kills her victims so unemotionally and fantastically.

Beyond the Genre, the character development of the series is really great.

Villanelle is a very interesting character. You cannot reason with her. Which is the hallmark of the villain in a thriller? It’s not a woman who is seeking revenge, or someone who has murdered in a moment of passion. It’s someone who says ‘yeah all I want is a nice flat, nice things and to do my job well’.

But her job is ‘assassin for hire’, and she cannot see how that is totally messed up. She is out to kill and follows her assignment. It’s like there is a monster within her. She is a force that does not care about who she is killing, however, unlike the monster of a horror story, Villanelle’s killing has a purpose. There is a motivation in why she works as an assassin which is what makes her so dangerous.

She’s dangerous because she subverts the idea of a killer. She has a facade of social acceptability - she’s white, pretty, female and dressed in designer clothes. She’s hot! She’s the type of woman that smiles at children in a cafe (and then knocks their food into their lap). She the woman one might hope to befriend or date but she’s kinda murderous, and as her boyfriend discovers you might accidentally die on a date with her.

The Importance of Global Value

So if Killing Eve is a Thriller, let’s talk about the Global Value.

Death hangs over everyone that gets near Villanelle and the viewer can easily see that the Global Values of this story range from Life to Death with the possibility of damnation if the protagonist Eve Polastri gives up her investigation to stop Villanelle.

And finally, in the end, Villanelle and Eve have definitely made the hunt for each other personal on numerous levels.

Why is the Global Value so important?

We will be discussing the 5 commandments of storytelling in-depth for each episode, so you will become very familiar with them.  This is the reason we are doing this podcast, to help you as a writer or editor get back to the basics and learn how to make scenes and stories that work by using the 5 commandments.

Also, Serial Killer or Espionage?  I think we might want to relook the sub-category at the end and see where it falls.

What are our expectations from this series after seeing the trailer?

I'm expecting to see lots of death, I'm expecting assassinations and lots of moments where I have to put my hands over my eyes.  I'm expecting lost of dramatic moments that involve life and death.

Just from the trailer, because I thought it was really powerful, we see Eve, the protagonist, looking at a broken window, and broken is a word that can also describe a person, so I am interested in seeing how this person, Eve moves through the series and becomes broken over time.

Also, the clip from the trailer has an amazing Speech in Praise of the Villain, where Eve says:

"I know are an extraordinary person, exceptionally bright, determined.  I know something happened to you.  I know you're a psychopath."

And that scene is so great for setting up the series and the anticipation for the viewers because we know that the protagonist and the antagonist will meet, as they should, and we are looking forward to it.

Just from viewing the trailer, I think we’re going to see action and lots of it.  And assassinations, I mean, it’s about an assassin after all.

So lots of assassinations, some hand to hand fighting, maybe between the two protagonists?  Though Sandra Oh doesn't look like a ninja, she might surprise us.

The Story Grid by Shawn Coyne

Can you think of any other TV series or films with badass female characters?

If with badass you also mean strong female characters then I love Tulip O’Hare in Preacher. She is an expert thief, an expert combatant and is portrayed so damn good by Ruth Negga. Her morality can be questioned, she is quite damaged and a very complex individual but she rejects the stereotypes that are put on women and that’s what I love the most about her.

You also have Wonder Woman and Elisabeth Salander - who fight for what’s right.

Let us know your favorite badass women assassins in the comments below.

Also, let us know how you like the podcast.