Killing Eve Season 3 is now underway, with our main protagonist Eve & Villanelle continuing their cat and mouse game. Does this season work? And how does it compare to the previous seasons? We invite you to watch the episodes with us during the week and then tune in to the podcast as we discuss what worked, what didn’t work, and why. 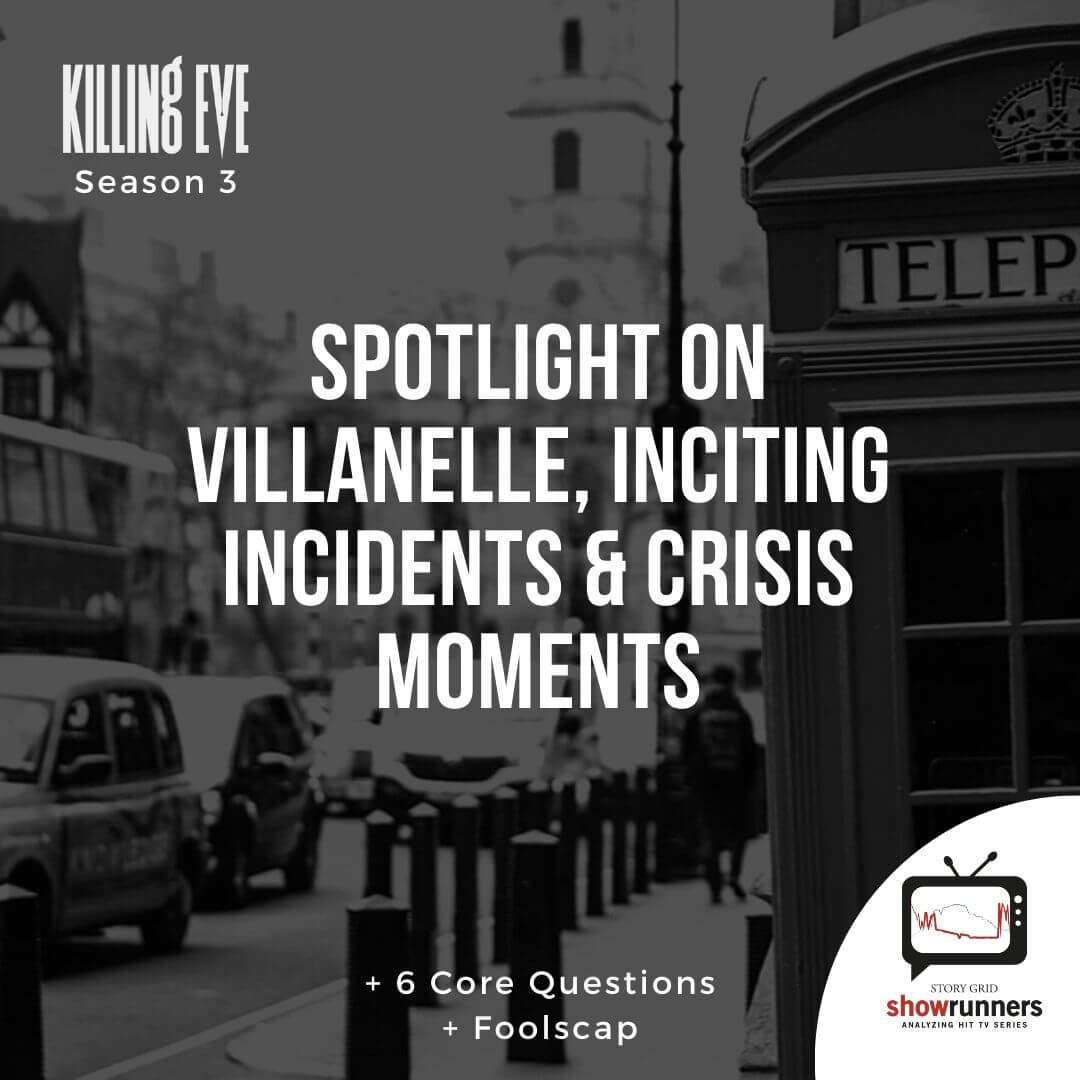 When the 3rd season is over, we’ll have a summary episode where we talk about the six core questions and release our foolscap.

Reminder: Please watch the TV-Series Killing Eve Season 3 Episode 8 before you listen to the following episode. We not only give away spoilers, but we talk about the global story, and it’s just more valuable for you if you know what we are talking about because we reference a lot.

Spotlight on Villanelle: Three Seasons have passed and we still talk about Villanelle. What is it about her?

Let’s revisit her character across the series.

Mel: Villanelle demonstrates a cold brutality even though she looks stunning and absolutely beautiful which deceives everyone around her. Her beauty and innocent appearance is like the trap that lures her victims into her reach so that she can kill them.

Villanelle doesn’t follow a moral code and only does what excites her. If she has to do something, she doesn’t want to, she falls back into lashing out like a child. Not being able to see the consequences of her actions. She’s impulsive, while her ego requires her to feel invincible. And still, there’s something about curly-haired women in their early 40’s, that throws her completely out of balance. And she can’t deal with her emotions..

As we have gotten to know and love her, she is a twisted personality. She can show every personality trait that we can sympathise with. From funny, to warm, vulnerable, but also strong and frightening. And whenever you look at her, you can’T tell what’s on her mind. Is she gonna kiss you or kill you? That makes the show very exciting.

As said in the last episode of season 3, she can make people change to their worst. She is the reason why Eve unlocked her inner monster and changed from that self-doubt person who carried so much guilt and said sorry for everything to becoming a person who slowly loses her moral path.

The beauty of the show is, as it seems, that maybe one day Eve and Villanelle will be at the same level. Eve seems to become darker and lose her sense of justice and morality, while Villanelle walks on the path of redemption - which was only possible through Eve. And maybe, one day, Villanelle will have changed so much for the better, that she can lead Eve back on the path of redemption. That would be a great twist and sign of character development.

Parul: If we take our toolkit out and start to analyze this character and use categories - how might we break up Villanelle’s character?

Randall: You and I have talked about this on a couple of different other mediums, the anti-villain and the antihero. And I think we both agree that Villanova falls into the antihero a bucket, basically because she's not your traditional black and white anti-villain. She's not completely evil because she is the person who's falling her Eve. She has multiple opportunities to kill her, Carolyn. She's not killing all these people that are hunting her. Uh, and she's actually and others that are hunting her.  She wants to get out as Mel said, she wants redemption.

Parul: We witness her vulnerability - her abnormal upbringing. And the beauty that Melanie talked about is actually something that you can't help, but be drawn to if she was, you know, not so pretty if she didn’t look so angelic and wasn’t so charming, would she still be an anti-villain?

We also see how Villanelle’s love story gives her a chance for redemption.

Melanie: At the beginning of season three, she had to live with the fact that Eve might be dead. She didn't know if Eve had survived. At the end of season two, Villanelle shot Eve because she was not ready to let Eve walk away, but in season three, Villanelle turned around, told Eve to turn around as well and let her walk away. That’s proof of love.

Parul: I love the integration of love and thriller, you know we have been quite critical of season three, but that doesn't take away from the fact that it's still a memorable series that people will be talking about for years to come. Villanelle is a character that we will be referencing for a long while.

A look at the inciting incidents across all three Seasons. How do they compare?

If it's a thriller, they all start in debt. So that's a good start for any thriller.

Season 1 II: There is a killer on the loose and they need to solve the crimes

A look at the crisis across all three Seasons. How do they compare?

Season 1: Should Eve, now sacked, go to Paris, confront Villanelle and risk her life? Or does she return to London

Season 2: Should Eve save Villanelle from Raymond by killing?

Season 3: (Multiple characters have crisis questions - whose should we follow?)

Summary of thoughts on the crisis points

Switched on Pop: How to Soundtrack a Villain

What season is up next?