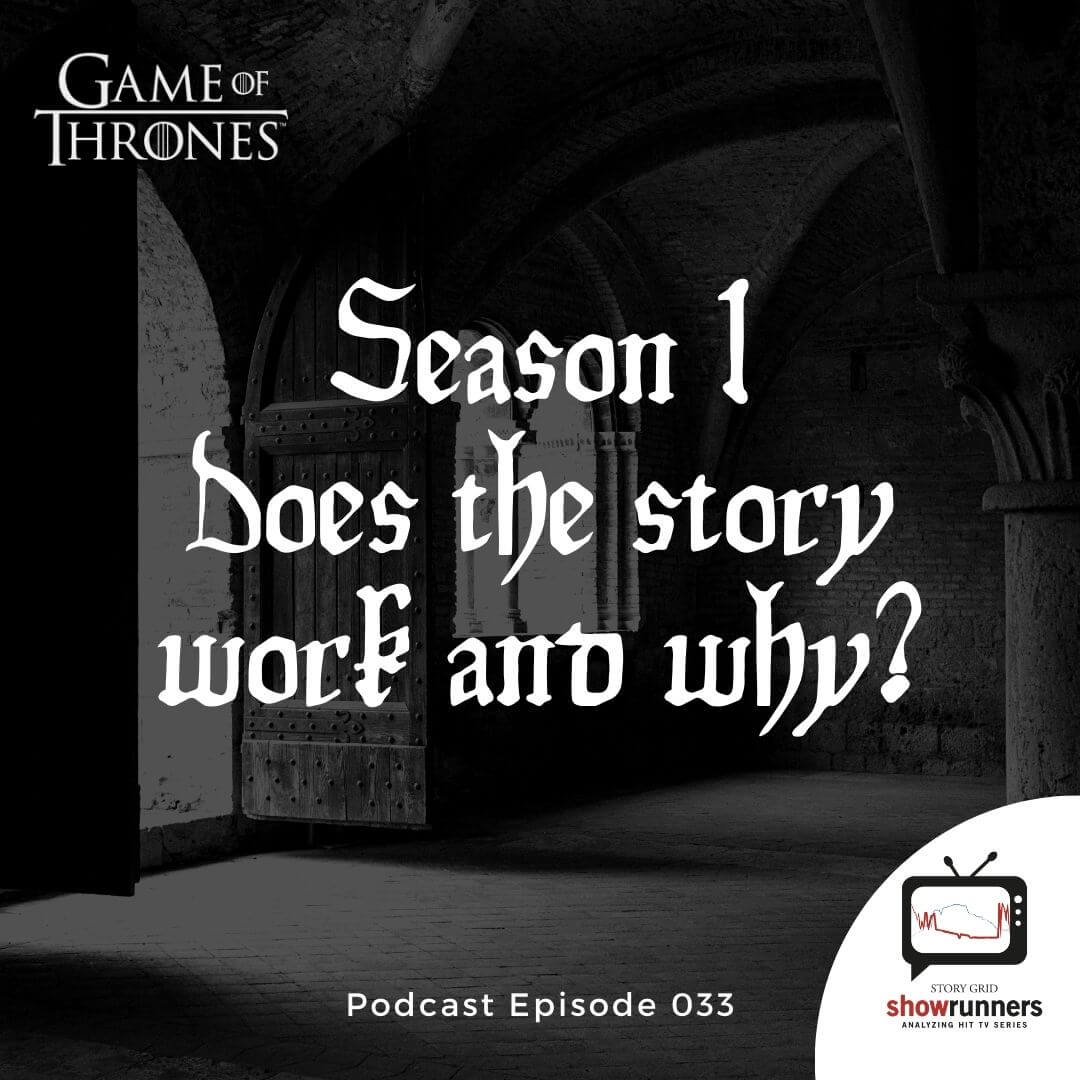 This is a series with a mini-plot, multiple characters that each pursue their own storyline but come together for a larger story arc. In this first season of Game of Thrones, you’ll see multiple storylines weaving together. But the value at stake is power - the clue is in the name: the Game of Thrones. This is closely linked to the action genre with its values of life and death. And you’ll see other genres laced throughout which we will share in our show notes.

One sentence review from the editors?

Randall: This is really one of my favorite series, and the screenwriters did such a great job with the first season.  It’s a great example of how to write a screenplay from a really excellently written book series.  And the author (George R. R. Martin) did such a great job connecting the plotlines throughout the books/ seasons.  This had to take so much planning, Harry Potter level planning.

Mel: Awesome fantasy story masterpiece with very deep, three dimensional characters, an amazing story and throughout plotline, as well as the best title music and video.

Parul: It is Society Genre combined Action at its best, everybody wants power and everybody will die.

What are the Editor’s Six Core Questions?

It’s a great way to analyze any story and figure out if it works. Here are the questions. We’ll touch on them in this podcast, but the full notes can be downloaded afterward.

Mel: GOT consists of such a huge landscape of plotlines and characters that it is really hard to boil down to one external genre.

If you ask yourself this question, you need to know first: Who is your main character? If you just watch Season 1, you might have thought it was Ned Stark until he was beheaded. You now realise that every character in GOT may die.

If you have already watched the entire series, you know that the story revolves around Jon Snow. Internally I think it’s a Status Admiration Story for him because he is able to adapt his worldview with the new information that presents itself.

Status Admiration: When a sympathetic protagonist with nobility of character and motive, along with a sophisticated worldview, encounters misfortune they will rise in spite of it.

For the global external genre, I’d say it’s horror. But that seems most valid if you take Jon Snow as your main character and look at GOT across all seasons.

For season 1, I’d say it’s more a society story turning around power and impotence mixed with life and death stakes.

Parul: It’s not uncommon for a series to have an overarching storyline and for each season to have another. In Season 1, we see the House of Lannister against the House of Stark. This is about power and impotence, and each character’s position of power or lack of power is closely linked to the threat to life they face.

They are playing a game of thrones, but with drastically different positions of morality. Ned Stark’s principled position leads him to make the wrong move, and he is killed. He was attempting a revolution, but he failed. This is the Society genre with the values of Action and morality close by.

Ned Stark is the main character for us, BUT we do see the children in the beginning of an Action story (inciting attack, hero at the mercy of the villain) and we see the Northerns including Rob Stark and Daenerys Targaryen preparing for war.

What are the objects of desire?

Starks: To have justice restored and power shifted to the rightful heir

Lannisters: To have power and get the throne

Daenerys: To have power and get the throne

What is the Beginning Hook, Middle Build, Ending Payoff?

Parul: It’s tricky to know what to cover. There are so many things happening. We start the series with the men mysteriously killed and this is the Inciting Incident for the Series and the horror genre, but in this specific season we’re tracking Ned Stark as a Society Story.

Society (core season storyline): King Robert Baratheon, Ned's old friend, travels to Winterfell after the death of Jon Arran. Ned and Catelyn prepare for his arrival and suspect he wants to recruit him for the Hand. (Episode 1) (power/impotence)

Other storylines are also kicked off in the beginning:

Action: To hide their incest, Jaime pushes Bran from the high window.

War/Love:  Daenerys is forced to marry the Dothraki warlord, Drogo, in exchange for an army to conquer Westeros and reclaim the Iron Throne

Progressive Complications: Jamie pushes Bran from the tower when Brandon sees Jamie with Cersi, Brandon doesn’t die and an assassin is sent to kill him, Lady Stark travels to tell Ned of her suspicions, the Night’s Watch recruits are not what Jon Snow thought it would be, Sansa betrays Arya

Crisis:  Does Ned Stark still assume the role of the Hand of the King knowing that his life might be in danger or stay safe but leave the King without a trusted Hand? (Episode 1)

Stakes: Ned senses that something is happening, Winter is Coming - if he leaves, he won’t be able to protect his family and the Northern Kingdom.  If he doesn’t go, he will be turning down his friend and his king, and he knows he is probably the best person to talk sense into his friend and advise him for the sake of the 7 Kingdoms (not drive the 7 kingdoms into war again) (life/ death)

Climax: He agrees to become the Hand of the King. (Episode 1)

Resolution: He begins to see how much power the Lannisters have over the king and the 7 kingdoms (debt, Cersei’s influence over the king when she insists that Arya’s wolf be killed) (Episode 2 and 3) and becomes entangled in the political games of the court

Inciting Incident: Ned Stark discovers that John Arryn might have been killed (E4)

Stakes: If he does not try to assume his role as “Protector of the Realm”, the kingdom will be left in the Lannister hands who he sees as the wrong heirs since Joffrey is a bastard son of his mother and her brother.  If he stays, he puts himself and his daughters in danger.

Climax: Ned refuses to show fealty, shows them the document signed by King Robert and declares Joffrey is not the rightful heir  (E7)

Resolution: Ned Stark is taken prisoner and all his men are killed (E7)

Inciting Incident: Rob Stark finds out about his father’s death and assembles his armies to fight the Lannisters (E8)

Turning Point Progressive Complication:  Sansa gets Joffrey to agree to show Ned mercy if he admits publicly that Joffrey is the rightful king (E8)

Crisis: At his public execution, does Ned Stark admit that Joffrey is the rightful heir and abandon his principles? Or risk death and stay principled? (E9)

Stakes: Sansa and Ned’s death if he does not agree; if he agrees, then the truth will be hidden and he might die anyway or at least be assigned to the Night’s Watch

Resolution: Ned is killed anyway, Sansa is captive, Arya escapes, Tyrion is made Hand of the King, Daenerys emerges from the fire with Dragons (E9 and 10)

What are the Obligatory scenes of the Global Genre (Society)

What are the Conventions of the Global Genre

What’s the point of view?

Mel: Multiple point of view characters are needed to tell a story that is so complex and stretches over many regions, houses, schemes, and overall history.

Still, I’d like to point out something GOT makes a lot of use of Dramatic Irony.

The first episode starts with the encounter of men from the Night’s Watch with a White Walker. One guy survives and deserts the Night’s Watch and flees south. He is ultimately killed for deserting the Night’s Watch because his news of the undead walkers sounds like  an old tale. No one believes him. Something the people from the North have stopped believing in, and his news won’t influence their judgment.

Even though that moment is not the inciting incident of the story itself, it is an inciting incident for the viewer because we are indeed witnesses to the existence of the White Walkers. We have seen them, too! We know what the deserter talked about is true. So the GOT story uses Dramatic Irony a lot. Dramatic irony is when the viewer knows more than the characters because we are witness to the schemes and actions of many characters!

The inciting incident for the story that is wrapped up between the seasons could be the death of the Hand of the King because with that the whole drama starts unfolding.

Randall: Other examples are the fact we know who pushed Bran out the window, but the characters spend the whole first season trying to figure it out and they never actually do, which is part of the narrative drive of the next season.

The screenwriters do a great job intertwining the pieces of the puzzle - The writers could have given us that first scene with the White Walkers and not directly connected it to the deserter being killed, that would have been a weaker version of dramatic irony.

We gain or maintain power and save our families' lives when we prove our ruthlessness, status, and authority through bloodshed and political bargaining.

Randall: I like the dragon reveal at the end. I was so surprised when Ned got killed.

Mel: Too many to count, but seeing how huge that Wall is was truly amazing because it reveals an undeniable threat to what might lay beyond.

Parul: After all the bloodshed and loss, it’s wonderful to see Daenerys rise from subjugated to power.